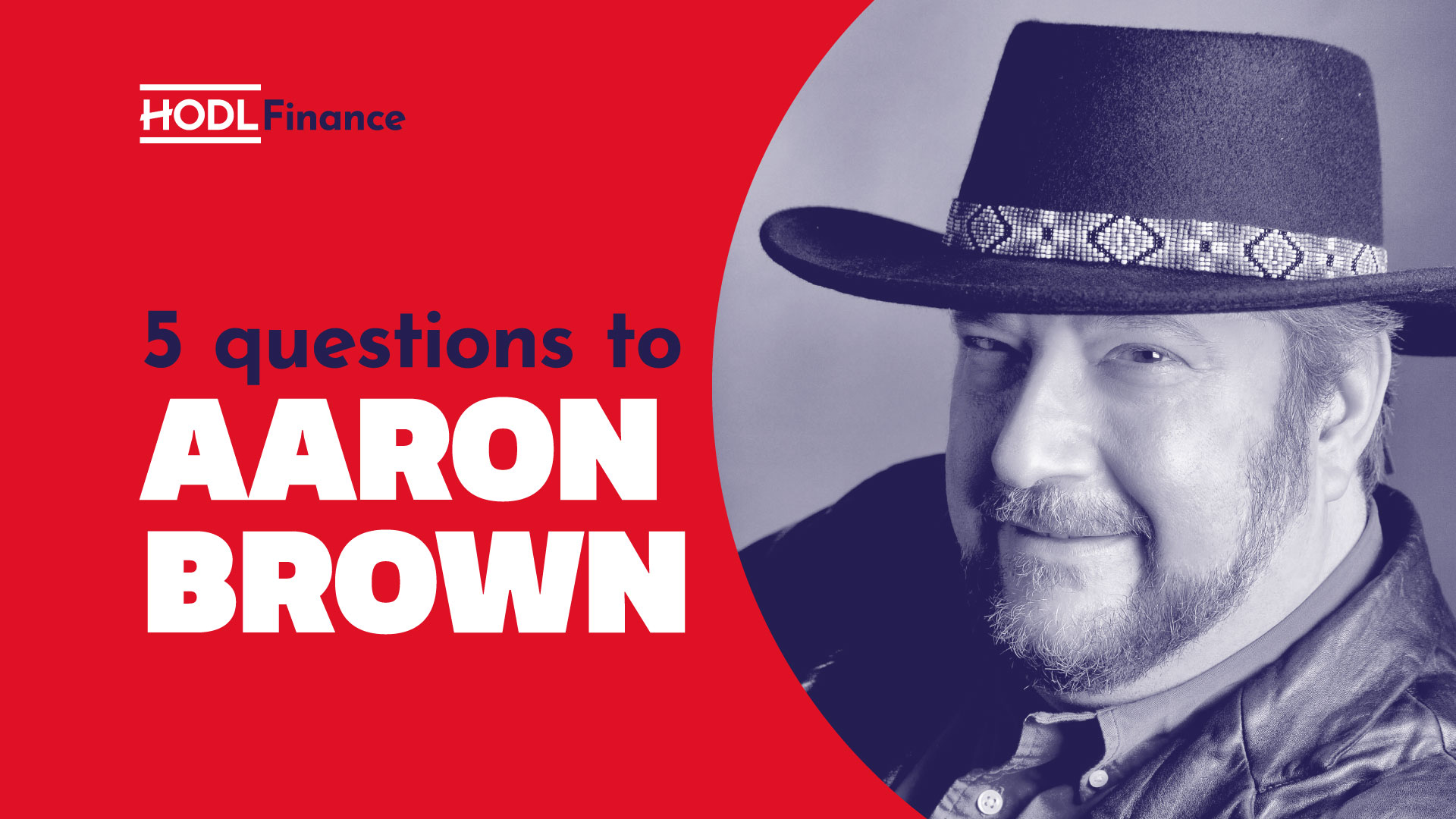 Our “5 questions to…” guest today is Aaron Brown, the Former Boss of the $226 billion investment firm, the writer for Bloomberg and the author of several books, including “The Poker Face of Wall Street”, named one of BusinessWeek’s top 10 paperbacks for summer reading in 2017.

Aaron is also a former Managing Director and Head of Financial Market Research at AQR Capital Management. He teaches classes, talks at conferences, and in his spectacular career, Aaron was also a professional poker player, trader, finance professor, portfolio manager and head of mortgage securities.

Our 5 questions to Mr. Brown.

The mass adoption of cryptocurrency was probably trading, and, in your own words, ‘that can only survive if real uses are found for the technology.’ How?

There are almost unlimited potential uses of cryptocurrencies: fat protocols, incentivized collective action, work sharing. Anything people now give away for free – open source code, blogs, videos – could benefit from the right currency enhancement. Anything sold in inconvenient form  – such as supported by advertisers or blocked by paywalls – could improve. All sites with internal point systems – like Amazon reviews or Quora – could be made better. All information that is now either hidden or given away free could be priced properly. Plus there are all sorts of things that people don’t do at all today that would become generally useful.

But all these require people to design and build the right systems, which in turn requires investors to fund the effort and only succeeds if users are willing to learn the new tools.

The value of cryptocurrencies has fallen eightfold last year. What silver-lining might be here besides the fact that it pushed the speculators away?

That’s a silly way to look at it. Crypto prices today are about where they were in September 2017. The run-up and crash pulled in about $20 billion in investor funding. Some of it was stolen or frittered away, but most went to support and is still supporting useful development. It did a lot to clarify legal and regulatory issues, and it pulled in a lot of financial institutions. It raised public awareness and stimulated a lot of developer ideas. The boom pushed crypto forward 3 to 5 years in my estimation.

The boom without the crash would have put too little selection pressure ideas, like the Internet from about 1998 to 2000, with really stupid ideas wasting billions of investor dollars and enriching frauds and idiots, giving them platforms to teach nonsense. Crypto would have been flooded with opportunists seeking quick money rather than thoughtful and talented developers with ideological convictions. Regulators and politicians would have fought to get their shares (or what they considered their shares) of the bounty, to the detriment of crypto. None of this would have killed crypto, any more than it killed the Internet, but the price of 1998 – 2000 was twice as many years (2000 – 2006) of obstruction and trouble, and the extra funds raised in 1998 – 2000 were not spent nearly as productively as the funds raised from 1995 – 1998.

You are a firm believer in the ‘middleware’ or blockchains that connect one crypto applications to others. Why is it important and what to expect in this field in the near future?

I wouldn’t call myself a “firm” believer, middleware is just one route to greater acceptance of cryptocurrencies. We might instead see the success of vertical integration – a group more like a traditional company than a decentralized autonomous organization running everything from the core blockchain and currency system to the end-user applications. Or perhaps success will come from “killer apps” so good that people put up with disconnected and inconsistent cryptocurrencies.

The middleware argument is that crypto is far more valuable if learning one crypto application automatically makes all others easy. The Internet analogy is AOL. AOL added no new content to the Internet, it just allowed new users to access a small portion of the net with a single sign-on. Some people joined AOL for investment tips, some for news, some for sex chats, some to shop using Amazon and eBay. All of those sites were available before AOL, but signing on required site-specific actions and often browser incompatibilities or other headaches. AOL raised massive capital to flood the country with DVDs and other promotions – giveaways and ads – that drew in a critical mass of users. Once that happened, AOL was no longer needed, and it faded away. Today some people use bitcoin to send money overseas, other people use Ether for smart contracts, other people use Monero for private transactions. But using one coin doesn’t make it easier to use others. For example, I might want to keep some spending cash in a stablecoin, and seamlessly convert it into whatever cryptocurrency I need for specific applications, without knowing or caring about the theory or value of that crypto. I’d just go to a site and my browser would convert all prices to my chosen stablecoin (the prices might fluctuate). I’d click to buy and the conversion would be handled without me noticing. If someone introduces a fat protocol – say a location protocol that allows people to bid to see my location and pays me, while I pay to make send my location for Uber or other services – middleware could make it transparent to me; I just sign up and see some stablecoins deposited to my account periodically, while the people I want to know my location know it, and the ones I don’t want to know my location don’t. These sorts of changes could be the AOL for crypto.

‘Crypto as a technical solution is here to stay and the economic sector developing and supporting it will thrive. 2% of the world economy could be financed via bitcoin’, you claimed for Bloomberg in 2017. Has the bear market and developments in the industry changed your mind over this time? Thomas Power told us that 99% of coins will die.

I’ve kept the 2% constant since 2013, although it’s for all crypto, not just bitcoin. I did something similar for the Internet in 1995 when I said 5% (the actual total today is about 7%, so I wasn’t far off). I don’t change these estimates for minor ups and downs like the price spike in 2017 nor the collapse in 2018. But if I were to change it, I’d move it up a bit. The technical progress in 2018 was above expectation, not an A+ year, but a B or B+ one. The price spike brought in lots of investor money which is still financing useful innovation; and the collapse drove out a lot of schemers, fraudsters and delusional optimists.

But the point of valuation is not to get the number exactly right, no one can do that. Having a firm valuation helps you buy low and sell high, and keep a reasonable portfolio exposure. Any reasonable valuation will serve you better than having no valuation, which leads you to ignore opportunities or following the crowd in booms and busts to your regret or hodling down to zero. The less you know about the value of something, the more important to put your best guess number on it.

Besides stablecoins, decentralized exchanges, custody solutions, second-layer networks, and other technological advances, which development seems the most promising to you in the crypto economy?

You have two different categories. Stablecoins, at least those backed by assets rather than algorithms, and custody are about the interaction of crypto with the traditional financial system. Like most cryptophiles, I have mixed feelings about that. It could benefit both sides, or it could ruin crypto. Anyway, when crypto meets fiat is where all the excitement and attention is, but it’s the sideshow, not the main event. If crypto is useful, it will thrive whether it’s easy, hard or impossible to exchange crypto for fiat. If crypto is not useful, it will flop.

Second-layer networks and algorithmic stablecoins are both exciting areas for improving crypto. Another is end-to-end solutions, but I have mixed feelings about those as well as they tamper with the crypto ethos of releasing open source tools to the world to be used as people see fit, with careful game theory design to encourage productive interactive use. Fat protocols are exciting, as are agent-based crypto. True decentralized autonomous organizations could revolutionize society, not just the economy.

But the best ideas have not yet occurred to me, and have not been mentioned in things I have read. Since Satoshi Nakamoto – who seems to have been a cypherpunk around 40 or so, or perhaps a group of people around that age – the real innovations in crypto have come from teenagers. Older people did most of the work, but the transformational ideas came from kids who were buying and selling on World of Warcraft before they had ever used a fiat currency. So don’t ask this question to anyone over 20, go see what middle-schoolers are doing.